The MiG Alley – Battle of the Swept Wing Jets

Scott Slocum had hinted about a possibility of doing an air-to-air session with the MiG-15bis and the F-86F Sabre just before the Chino air show at the Planes of Fame Museum that is at Chino in Southern California. This would happen with us using the Museum’s B-25 Mitchell bomber as the photoship for this shoot. We would be shooting from the tail of the B-25. We would camp out in the mid-fuselage and take our picks from the side door and then crawl the way back into the tail one photographer at a time for the prime shoot. We had the best pilots in the business flying for us. Kevin Eldridge would fly our photoship B-25 “Photo Fanny”, while the F-86F Sabre would be flown by Steve Hinton, and the MiG-15bis would be flown by Chris Fahey. I immediately jumped at the opportunity and drove my way to and back from SoCal especially for this hop. I drove in starting in the afternoon, reaching at night, and then was gone back the next day night after the evening shoot – it was literally a ‘get in, get out’ for me. It was a shame I could not stay back for the air show on the weekend but that is the name of the game – you got to balance everything and you shoot what you can, and leave the rest – as they say ‘you win some, you lose some – can’t get it all’

Just before day break on a rainy Sunday that was 25th June 1950, North Korea invaded South Korea with almost 100,000 men and hundreds of Soviet T-34 tanks, with an almost large involvement of aerial assets. The frontline American fighter at the time was the F-80C Shooting Star – a straight wing single jet engine design. The initial aerial engagements were still restricted to propeller-driven aircraft like the Lavochkin La-7, Yakovlev Yak-3/9 on the North Korean side and the F-82G Twin Mustang fielded by the US Air Force and the F4U Corsair fielded by the US Navy and Marines. The MiG-15 first entered the Korean War on Nov, 1 1950. Six sleek looking swept wing shining aluminum fighters from across the Yalu river attacked some P-51D Mustangs. Shortly thereafter, the US Air Force ordered the 4th Fighter Interceptor Wing at Wilmington, DE to pack up and deploy its F-86A Sabres to Korea. Before that move, the Sabres were held back defending the US, against any direct Soviet invasion. The Sabres were packed on the escort carrier USS Cape Esperance that sailed to Yokosuka, Japan. One of the initial sorties that the F-86 Sabres flew were ‘bait’ sorties – they flew slow like the F-80s to bait the North Koreans to respond to the threat – and then shoot down as many MiGs as possible – much like Operation Bolo conducted later in the Vietnam War by Brig Gen Robin Olds.

The Korean War unveiled the era of jets in air combat. That was the height of the Cold War era where the two sides Communist and Democratic forces were actively involved in war trying to color the world in either of the two flavors of government. For many active pilots flying their next steed was also a continuation of WW-II where they flew piston-engined propeller driven aircraft like the P-51 Mustang and the P-38 Lightning among others. Jet powered aircraft who could travel at one mile every seven seconds made the rate of closure faster than ever. Tactics had to be evolved to match these speeds. Along with speeds came performance and stress capabilities of the air frame as well as the fitness of the fighter pilot to sustain incrementing ‘g’s in split second time frames. The fighter pilots of WW-II had to quickly adapt to the above conditions of air combat in order to be successful in the dogfight of the jet era – they would be the pioneers of jet combat. The one thing that still remained a remnant of the WW-II era was the gun that was still the primary weapon to shoot down an enemy aircraft.

MiG Alley was an area that was named by the western air forces where they encountered a large number of MiGs and where the dogfights occurred. It is an area in the North Western portion of North Korea where the Yalu river empties into the Yellow Sea.

The early jet engines were turbojets – simple to design and manufacture in that age. In a turbojet, air is sucked in to the combustion chamber where fuel is ignited and this combination is channeled at the back of the engine – creating forward thrust and driving the stage which drives the first compression stage as well. The jet engine was invented in WW-II by German and British engineers. The Germans were the first ones to achieve operational status with the jet engine in the form of the Messerschmitt Me262. It was a combination of the jet engine and the swept wings that gave an edge to the Me262. In contrast, the earlier designs of the Allies were the straight wing fighters like the Gloster Meteor, the Bell P-59 of the US and MiG-9 of the Russians. The aircraft design featured straight wings instead of the swept wings and it was not until the advent of the F-86 Sabre on the US side of the house and the MiG-15 on the Soviets’ that speed, agility, reliability, and overall performance were improved from the lessons learnt from the earlier designs.

The F-86 design provided great all round visibility for the fighter pilot to have situational awareness and was built for aerodynamics and maneuverability in combat. The MiG-15 design was much lighter than the F-86, and had a faster rate of climb with a higher service ceiling. The skies over Korea is where these two jets would face-off in a dogfight in the jet age. The MiG-15 was fitted with a 37mm cannon and two 23mm machine guns. The F-86 was kitted with six 50-cal machine guns – two could fire at any one time.

The Soviets were smart about the choice of ammo – because they had a bigger caliber round, they could use the US ammo if they overran any airfield with lots of ammo dumped behind whereas the same cannot be said about the US forces overrunning the Soviet airfields. Fuel in the MiG-15 provided flying for just over an hour – if you have the throttles up continuously, it was around 45mins. The F-86 Sabre carried over a 100 gal more fuel internally, and could be fitted with external fuel tanks to increase the range. Chris Fahey who flies the MiG-15 today, flew F-16 Vipers in the US Air Force from 1983-84 to 1995 where he was an instructor pilot. According to Chris, the MiG-15 and the F-86 Sabre were the two closest matches fighters that the adversaries fielded during the Korean War and as a result the best pilot on that day and at that moment decided the outcome of any dogfight.

The US Air Force pilots many of whom flew during WW-II provided that rich experience of combat that they applied to the jet era and others were trained at Nellis and considered to have better training than their counterparts in the Russian, Chinese and North Korean air forces. Maj. James Jabara was a Mustang pilot who flew the F-86 and would be the first jet ace for the US Air Force – as well as one of two triple ace achieving more than 15 MiG kills in the Korean War. It is alleged that although the war was about North and South Korea, many Soviet pilots participated in the air battles that took place at the time.

Couple of shots remind me of the dogfight that Col Ralph Parr, US Air Force (Retd) had gotten himself into over Korea. He got separated from his formation of four Sabres as well as his element lead chasing a MiG-15 in the opposite direction almost at tree top level. He dove trying to come up behind the MiG and almost went supersonic where his controls got sluggish and controllability dropped. He was going to overshoot the MiG when he barrel rolled trying to maintain energy but bleed off airspeed. The enemy MiG driver was no amateur – he immediately threw his MiG in a barrel roll to counter Col. Parr’s move and both ended up in a Scissors maneuver in the horizontal plane – where both the aircraft keep rolling and slowing down trying to fly on that thin line of stall and controlled flight – the pilot who is faster ends up in front of the slower pilot and is dead meat.

Well in this case, the MiG driver applied a little bit throttle during one of the rolls and that landed him right in front of Parr’s Sabre – literally few inches away with hot jet exhaust blowing down the Sabre’s air intake in the nose and in general caught up in the MiG’s jet wash – another danger of dogfighting in the jet era. Parr backed off his Sabre and rolled high once more to put some distance and get some height from the MiG and once he had the MiG in his sights, let go of some of the 20mm ammo and flew through the explosion of the MiG – racking up a kill. 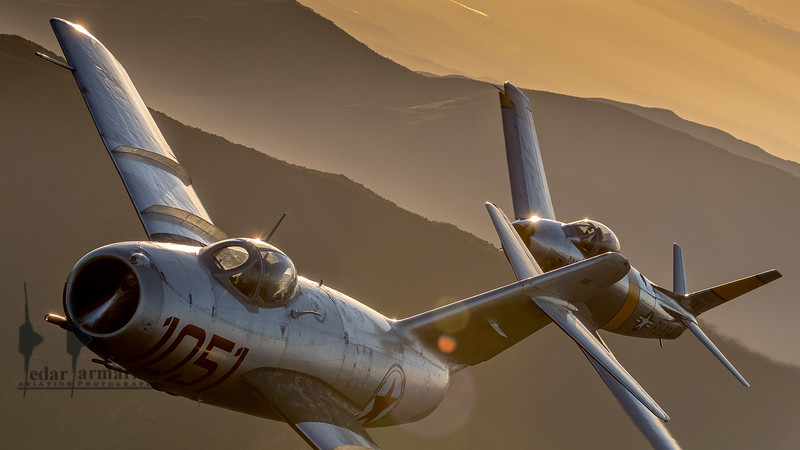 The MiG-15bis of the Planes of Fame began life in the Chinese Air Force and manufactured in 1952. There is not much history of the jet while in the PLAAF but it flew there till 1985. After that it was bought by Tom Friedkin. It was restored by Rick Brickert for Tom and donated to the Planes of Fame Museum by the Friedkin family in 1998. The F-86F Sabre (52-5012) served in the US Air Force. It was overhauled in 1960 and was sold to Argentina where it served until the late 70s. It was later brought back to the US and eventually made its way to Tom Friedkin who again restored it and donated it to the Planes of Fame Museum. The Sabre is painted in the scheme flown by Capt. Clifford D Jolley, 335th FIS/4th FIW. He was the 18th ace of the Korean War.

Planes of Fame Air Museum was founded by Edward Maloney in Claremont CA on January 12, 1957. It was simply called the Air Museum in the beginning since there was no other museum that existed west of the Mississippi River. Original collection was just ten aircraft – and from there the Museum has grown to over a hundred fifty aircraft out of which more than fifty are flying today. I equate Planes of Fame Air Museum with the likes of Duxford in the UK – it is a place where “history comes alive” literally. With their annual air show, its just not the aircraft but their WW-II re-enactments with the tracked vehicles and tanks and the volunteers that dress up as the Allies and Axis forces. It takes me back to my days as a kid giving life to the sketches I read in the Commando comics. It is awesome to see all the old warbirds come to life and fly in the sky as they did once.

That is all for now – Thanks to Chris Fahey who filled in some of the gaps in the history of the specific F-86F Sabre and MiG-15bis that Planes of Fame has. I will leave everyone with the below key takeaway though –

It is said “A generation which ignores history has no past and no future” – Planes of Fame Air Museum keeps the mission alive – to preserve aviation history, inspire, educate the new generation and honor aviation pioneers and veterans.