It was Day-2 in Marathon, Florida of the shoot organized by Centre of Aviation Photography (COAP in short). It was led by Steven Comber from the COAP side, and an awesome photographer and good friend José “Fuji” Ramos-Navarrete, from the US Navy side of the house. We were in town to cover the change in command of the VFC-111 “Sundowners” squadron. Being Florida, it was hot and humid – being in a hot sauna – I was absolutely tired at the end of an exciting Day-1.

Day-2 started early since we wanted to bag a sunrise shoot of the F-5N Tiger-II from VFC-111. It took us an hour to get from our hotel to NAS Key West. It was already raining throughout the night. The weather forecast was iffy and while enroute it started raining heavily. Steven got a text from Fuji that it was absolutely lashing on the airfield and that he was texting from under the wing of a Hornet. Then we remembered someone had said “puddles” at the dinner the day before and then we all were hoping for some good reflection shots – only if the rain slowed down. And the rain did slow down as we reached the gates to the base. We were received by our fantastic host – Cdr Matt “Yort” Pearce from VFC-111 and as we transferred our gear from our Bus into the van, he mentioned that the rains were supposed to stop in sometime. That was good news

phew!! After around 5 mins of driving around we hit the ramp and holy crap – what a scene that was. It had stopped raining – the ramp was covered in puddles, the sky was clearing to the East, with some cumulus cloud activity to South East and yessss REFLECTIONS were plenty. I had to get the tripod out – and by the time I got ready, everyone was already clicking away.

Some of us had brought tripods since there was a mention of sunrise and sunset shoots. At least I had brought along mine. For those of us who did not have it, they had to “invent” and use whatever resources they had – the cameras were kept on the camera bag with the lens pointed in the direction of the aircraft, camera put on the timer mode and then hit the trigger. For guys like me who are not accustomed to shooting on a tripod, I had to remember things like settings on the camera – change to AFS mode, put it in aperture priority, decrease the aperture to maybe f/10, take a reading when you focus – test a shot out – damn, the lens fogged up again, screw that shot, but check it for exposure – Aaah it was too much overexposed – note the shutter setting, and switch to manual mode increasing the shutter speed, and damn do I need to underexpose a bit – no forget it, its too dark, and so on and so forth – Understand the situation, Adapt and Improvise – was the name of the game – What the fighter jocks term as “SA” or Situational Awareness – you need it everywhere – even in photography too

That and obviously you need to know your gear better than anyone – how it works, what are its limits vis-a-vis lighting conditions, even sometimes to the extent of knowing how many dust specks are over the sensor and at what apertures they are likely to get exposed on the end shot – since I have learnt it the hard way where I have reduced the aperture so small that I could see some areas of the photo where there was such an intense concentration of the dust specks that it was difficult if not impossible to recover that shot.

After some initial shots, the group made its way to where the F-5N of the XO of VFC-111 was parked – ideally for the sunrise shoot. As the clouds kept moving so did the light, and we saw rains in the distant horizon. There was an orange band that was caused in the horizon due to the land below, sun rising in an area free of clouds, and grey clouds above – and in front of all that was the Tiger – it was an opportunity extraordinaire provided by Nature at the right time. 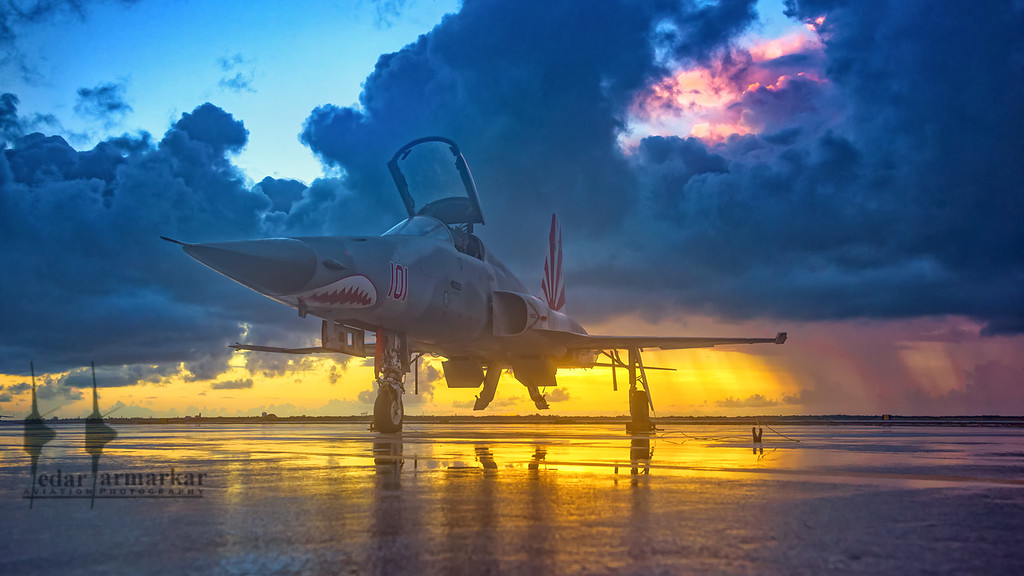 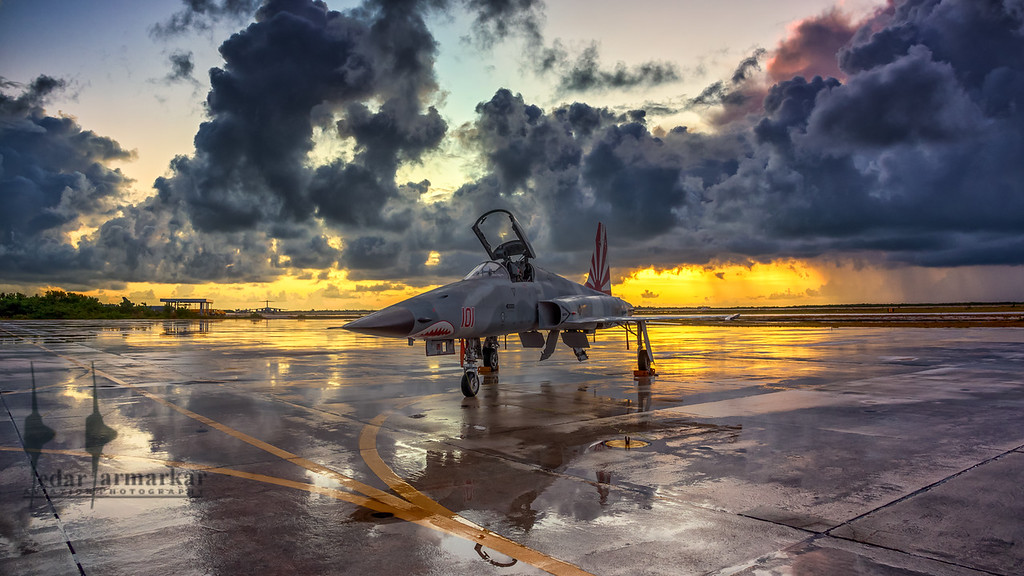 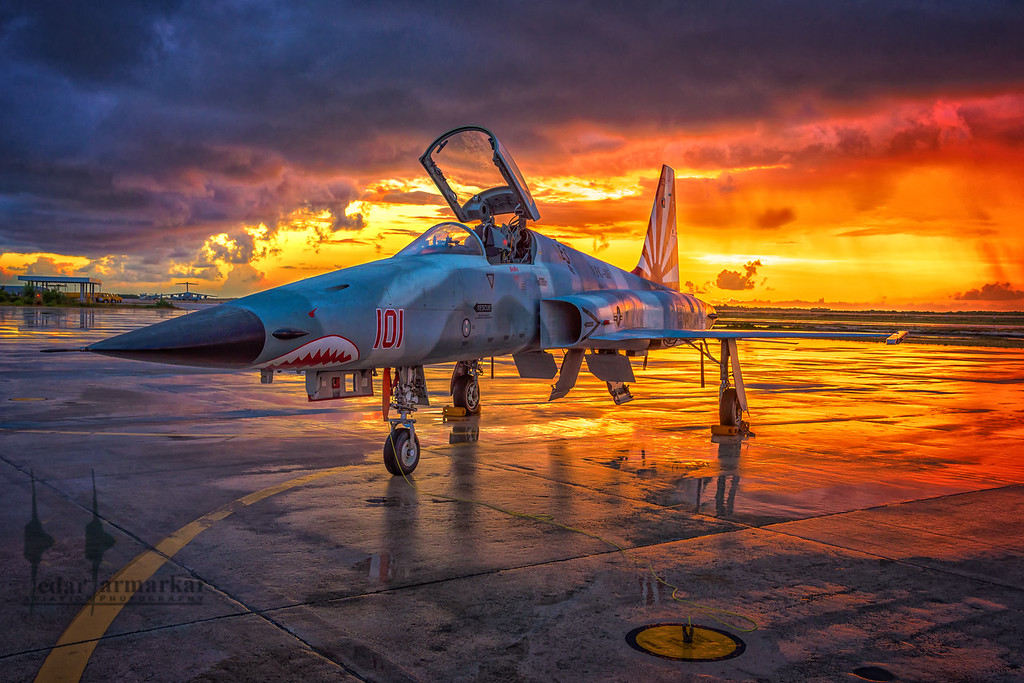 In the heat of the moment, you also need to experiment with angles as well. So you take 3-5 shots from the same angle, varying the zoom you have; then switch to a different position to yield a different angle on the subject and repeat – one thing to consciously do was shoot from other side of the aircraft as well – since the sun shone upon that part well with its mellow diffused light through the clouds, and capture some good backgrounds on the other side of the aircraft as well, as seen below, left and right.

Seen above left is Fuji in the moment when he captured the F-5N Tiger in front of a great sunrise. Above right is Steven going “down and dirty” to capture the same. I think Ivan joked about he had not taken so many shots of a single aircraft at the same time ever

I felt the Tiger was posing for all of us patiently, so we could just grab “portraits” from all the possible angles.

At the same time, there was lots of activity on the ramp containing the Hornets and Super Hornets of VFA-106 “Gladiators”, and VAQ-129 “Vikings” and VAQ-131 “Lancers”. The Gladiators and Vikings form the Fleet Replacement Squadrons for Super Hornets and Growlers respectively. The Growler is a Super Hornet platform kitted out with Electronic Suppression and Countermeasures system, for conducting electronic warfare and support. The Lancers are an operational Growler squadron tasked with Carrier Air Wing 8 aboard the carrier USS George H.W. Bush. The Sundowners provide SFARP (Strike Fighter Air Readiness Program) to the FRS and operational squadrons replicating threats. The Growlers were getting ready to launch for some missions at sunrise. As the first Growler got airborne, it was a sight to see – the runway lashed with the rains had puddles of water that was blasted away by the jets tires and engine exhaust – and because it had rained the ground was cool and had almost no heat haze. I raced into the van to get my second camera body and long lens so I could capture the subsequent ones getting airborne. I got lucky with it since the light was not so bright as to dilute the shock diamonds of the afterburner of the Growler engines and hence managed to get some of the diamond action as well. 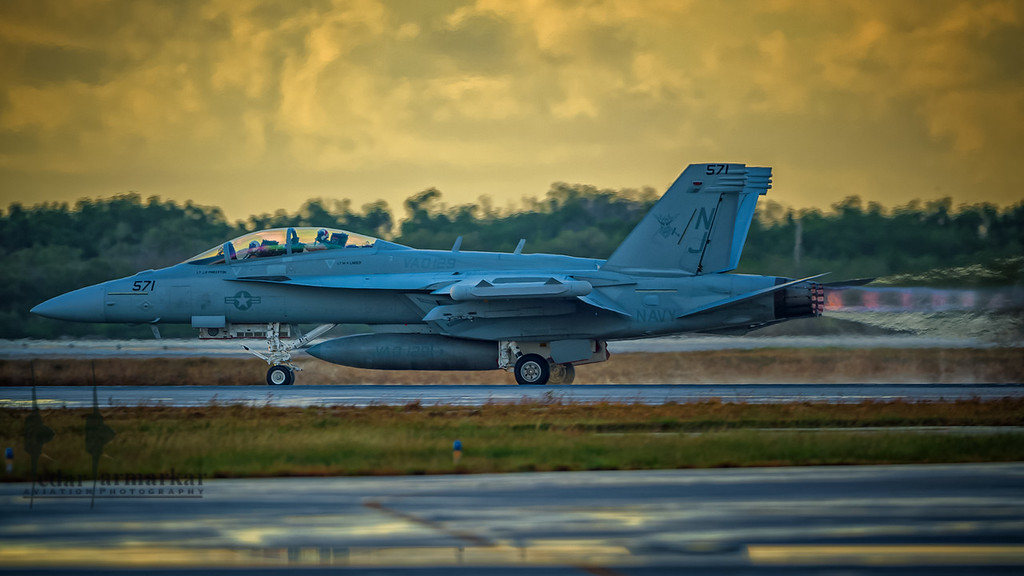 After that we headed back to the training room for some break, rehydrate with water, and get ready for the next one. Even though it was early morning, and it was cooler than the day before, after that frenzy I realized I was heavily sweating – guess thats because of the humidity. Even a small amount of action can get sweat pouring over there

The one thing I realized from the sunrise shoot was – it can get hairy pretty quick. I have done some sunset shoots and night shoots. The difference with sunrise and sunset shoots is the amount of “warm-up” time you get in the sunset shoot is much much more than the sunrise one. Most of the times when I am rooting for a sunset shoot, I am already out and about during the day. I tend to start experimenting with the settings as the sun slowly starts its downward journey – but you have enough time. By the time the sun is almost touching the ground level at the horizon, I have pretty good idea on what settings I should be shooting at. Plus as the sun comes down, the light starts getting mellower and reduces further at a gradual pace. This does not happen at sunrise – since it is dark before you start seeing the sun in the horizon, and once it rises, light changes more dramatically than a sunset. A night shoot is much easier since there is no haste for any changing of lighting conditions since you control the lighting. The things that helps you at moments like these are past experience and/or any specific workshops you might have attended for sunrise/sunset shoots. Experience is like maintaining familiarity or as we pilots call currency – as a Private Pilot I am required to have 3 takeoffs and landings in the last 90 days if I have to carry passengers aboard my aircraft. Same thing applies here – it does not matter how much vast or small experience you have – How recent was your experience put to the test is what matters – else it is like Organic Chemistry – its all volatile and evaporates from your mind

The workshops are a good way to learn some of the stuff that goes into low light photography. I have attended the 3G Aviation Media workshops – guys like Tony Granata, Douglas Glover, and Matt Genuardi – are very cool and great guys. The first time I went was in 2013 and the most recent was at MCAS Beaufort. I met Fuji for the first time in 2013 at the workshop after following him on Facebook

After attending those workshops, you get a different take on the low light photography aspect and you try some other different things than just trying to learn through experience and opportunities – the latter is the problem with me – I don’t get much opportunities and hence the experience goes down along with it. For me it was a definite improvement over when I tried to learn it on my own so just giving a shout-out to the 3Gs.

With that I leave you to it – have a nice one, and great long weekend – as I end this one and start another blog post citing another experience from a great year of clicks – take care and be safe!!