When things are meant to be ….. they just happen – Call it destiny, fate whatever – it makes you take certain steps for the result to be achieved.

It was Friday at Madras Municipal Airport in Oregon and it was the Air Show of the Cascades night show. I had been down there as part of a group doing air-to-air photography with the warbirds like the Lockheed P-38 Lightning, Mitsubishi A6M3 “Zero”, Nakajima Ki-43 Hayabusa “Oscar”, and the PBY Catalina. Friday started off really really early for us – 0500 at the hangar for the first session of the air-to-air between the Lockheed P-38L Lightning and the Mitsubishi A6M3 Zero. It was not clear skies, but the sky did have a lot of texture and variations of grey – I remember the “50 shades of grey”

Towards evening the Air Show started off with its flying acts and other cool stuff parked in static display. One of the last acts was the “Wall of Fire” around 2100hrs. The WoF as I call it, is literally hundreds of pyros that fire at the same time, shooting flames into the sky as high as 1000 feet – and just the visual flash of fire, and the feeling of heat that just envelops you – it is a treat for all the senses, eyes, ears, and the whole body. It is a must-see if you havent seen it.

Coming back to the air show in Madras, Brent Conner who was flying the P-38L Lightning from Erickson Aircraft Collection was supposed to make a pass by the airfield in front of spectators when the WoF would go off. All of us doing the air-to-air workshop were based out of the EAC building all the way to the right of the airfield – while the air show was happening all the way to the left. I have been to a lot of air shows and was plain lazy and tired to make the “journey” from one end to the other just to get this WoF shot of the Lightning. Brent took off in his Lightning for his demo routine and was nearing the end of it. Brent Clark, another photographer and I were standing by taking shots of opportunity. Suddenly we heard the air show announcer say – “Oh we are planning a nice surprise for you folks and it will happen as the Lightning will fly by”. I had brought my 600mm to test it out after it had been in for repairs at Nikon. I had mated that to the D7200 – which has a crop sensor yielding a magnification ratio of 1.5 – so effectively the 600mm became a 900mm with the D7200. We could see Brent Conner start his “bombing run” from our right to left. Looking at me not even raising the lens and the camera, Brent Clark asked me if I was going to take the shot of the WoF with the Lightning – and I was like “Naah, forget it – been there done that” and so I just watched as the Lightning flew over to the Air Show area. Hmm – awkward silence – nothing happened – maybe the announcer was not briefed properly or maybe the pyro guy did not light the pyros – but nothing happened. We saw the Lightning bank and start a turn to bring him from our left to right this time passing over the air show area, as he flew towards us. Then a thought struck me – since his nose was pointed towards us, just maybe I can get a shot of the Lightning with all the warm flash of fires caused by the WoF as it skyrocketed up. So I walked like 20 steps towards the start of the taxi way, readied my camera, Shutter priority, last minute I knew the fires might be overexposed if I kept the shutter speed too low, notched it up to 1/320, steadied my frame and started focussing on the Lightning as it flew towards me and panning with it.

The WoF blazed skywards, and the Lightning flew by – what happened next as I rested the lens hood on the ground and started to chimp – It would blow my socks off!!! I was like YGBSM

It was just like the “Perfect Storm” – everything was perfectly lined up – the fire blew at the right time as the Lightning passed by, the angle where I was standing was perfect to get that kind of shot. Even in that low light, the shot was in focus. To top it off, the Vibration Reduction on the lens was off (I found that out the next day) but still the Lightning was sharp enough. 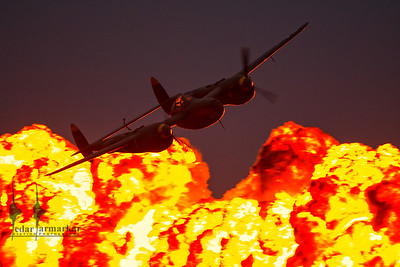 I looked at the shot again and again and I could not believe my eyes – It looked like a scene from WW-II where the Lightning was flying by after a strafing run on a train transporting ammunition and it had hit bombs and stuff that were going off like crazy, with the flames of the WoF below and in the background, leaping upwards. Plus the WoF went off at the perfect time as the Lightning crossed show center.

So sometimes, things do happen even if you do not wish or want them in the first place.

Moral of the story is – even if you have seen it a thousand times, keep clicking – you might get something unique in the process – and if you do not, well – its the digital age, you can just delete the shot

So long folks, until next time – take care, be safe and blue skies!! (Y)